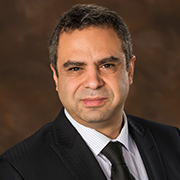 Dr. Chamsuddin is Associate Professor of Radiology at Balamand University/Saint George University Medical Center. He is the founder and Medical Director of the Center for Laser and Interventional Surgery (CLIS) in Beirut, Lebanon.

In 2009 he returned to its native country where he founded CLIS and Global Teleradiology both based in Beirut. He joined Balamand University as Associate Professor of Radiology and started its Stroke Program. In 2012 he joined Quantum Medical Radiology and became the Chief of IR at Piedmont-Newton Medical Center in Atlanta, GA.

Dr. Chamsuddin has published more than 27 articles and book Chapters and is a reviewer for the Journal of Vascular and Interventional Radiology as well as the Journal for Computed Body Tomography.

He is the Vice-President of PAIRS and the Chairman of its membership Committee.