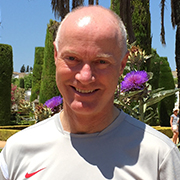 Gerry O’Sullivan received his medical degree from the University College Cork, Ireland in 1990. After 2 years in internal medicine (MRCPI) he went into Radiology in Derriford Hospital Plymouth, UK, in 1993,  transferring to St. George’s Hospital London in 1995. He passed the FRCR in 1997; and obtained CCST in 1998. He undertook a IR fellowship in the world-renowned Stanford University Medical Centre, Stanford, California under Michael Dake/Charlie Semba in 1998-1999. Dr. O’Sullivan was Consultant at Rush Presbyterian St. Luke’s Chicago from 1999-2002 and has been a full time IR in Galway since 2002.

Dr. O’Sullivan is interested in venous disease and was the first awakened in Stanford nearly 20 years ago and has remained strong ever since. Currently Dr. O’Sullivan performs about 70% venous related work. His particular interests include venous thrombolysis and thrombectomy, venous stenting, venous stent design, IVC and iliac venous reconstruction. Proctor for Cook Medical, Bard, BSCI, Aspirex.

Out of work he loves golf, skiing and surfing. Married for 22 years to his beautiful wife Karena, he has 4 great kids between 16-10.