Abdominal Aortic Aneurysm: Screening Program is the Key First Step for Improving the Quality of Care in the Middle East 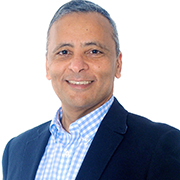 Hany Hafez graduated from Cairo University School of Medicine, where after he started his basic surgical training in the UK in 1991 and obtained his RCS Fellowship in 1993. He joined the North West London Specialist Surgical Training Programme and spent three years (1994-1996) as a research registrar and a lecturer at the St Mary’s Regional Academic Vascular Unit, Imperial College, London during which time he completed his PhD thesis in Thoracoabdominal Aortic Aneurysm Surgery. In 1998, he joined the Regional Academic Vascular Unit, University of Natal, Durban, South Africa as an exchange Senior Registrar for one year. During this year, he gained considerable experience in arterial trauma and complex infective arterial diseases. Upon his return to the UK, Dr Hafez joined the Academic Vascular Unit at Charring Cross Hospital and St Mary’s Hospital to complete his higher surgical training in 2001.

In 2001, Dr. Hafez was appointed as a Consultant Vascular Surgeon and Director of the Chichester Aortic Aneurysm Screening Programme at the Royal West Sussex NHS Trust, UK. Under his directorship, the aneurysm screening programme expanded from covering a population of 150,000 in 2001 to 1.6 million in 2014. During his tenancy, Dr Hafez developed a new minimally invasive approach to open aortic surgery and performed the first allograft aortic replacement in the UK. In 2013, he was one of seven UK surgeons who performed more than 100 AAA procedures with zero mortality.

Dr Hafez has numerous publications on vascular subjects ranging from aortic aneurysm epidemiology and pathology to arterial trauma and venous disorders. In November 2014, Dr Hafez joined the King Faisal Specialist Hospital and Research Centre, Jeddah, KSA where he is currently based.