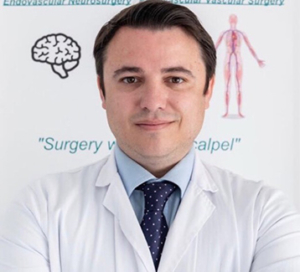 “Dr. Alhazzani: is an Associate Professor of Neurology at College of Medicine in King Khalid University. He is currently president of Saudi Stroke Society, Vice President of MENA stroke association and general secretary of Saudi Neurology society.Dr. Mario Martínez-Galdámez graduated in Medicine and Surgery in 2004 from the Complutense University of Madrid. He trained as a Radiology Specialist the Puerta de Hierro Hospital, Universidad Autónoma de Madrid, with training in Interventional Neuroradiology between 2004 and 2009. He obtained the American certification by the “Educational Commission of Foreign Medical graduates” (ECFMG) in 2013. He was Head of the Neuroradiology Unit at the Valladolid Clinical Hospital between 2012 and 2015, implementing endovascular care of the Stroke Code with a 24h care model. Currently, he is the Head of Interventional Neuroradiology unit of the Fundación Jiménez Díaz of Madrid. From a research and teaching point of view, he is the author of more than 40 articles in national and international scientific journals and has been a regular principal investigator of clinical trials since 2007. He has made more than 50 presentations in national and international congresses, being also a regular reviewer of the main national and international journals of the specialty. He is a member of the main national and international medical societies, a member of the Evaluation Committee Madrid-MIT M+Vision Consortium and has completed his executive leadership training at ESADE Business school. Since 2018, he has been recognized as “Fellow of the European Board of Neurointervention”

His academic appointments include immediate ex Dean of College of Pharmacy and vice Dean for clinical affairs, chairman of the department of Medical Biochemistry, Head of international collaboration program in king Lhalid University he is currently a board member of national neurology scentific board and national neurology examination board.