Treatment of the Complication in FD Treatment 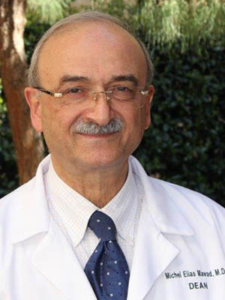 Dr. Michel Mawad was appointed Dean of the Gilbert and Rose-Marie Chagoury School of Medicine in February 2017.
Dr. Mawad returned to the Middle East in 2015 after a remarkable 32-year career with Baylor College of Medicine in Houston, Texas, where among many other achievements, he pioneered minimally invasive techniques for the treatment of cerebrovascular disorders such as aneurysms, arteriovenous malformation, and stroke.
Prior to his appointment at LAU, he spent two years building a stroke center as a member of the Neurological Institute of the renowned Cleveland Clinic in Abu Dhabi.
Dr. Mawad brings an ideal combination of proven excellence in the clinical, academic and leadership fronts. At Baylor, he held various key positions in radiology, neuroradiology, neurosurgery, neurology and ophthalmology — initially as clinical assistant/associate professor and later as tenured professor and chair, in addition to serving as neuroradiology fellowship director for 25 years.
Dr. Mawad holds several patents, boasts over 300 publications and has received research and educational grants totaling over $4.25 million in addition to various honors and awards.
Additionally, he has hosted 30 international meetings and symposia, given 130 seminars and presentations, and authored dozens of clinical and research protocols.
Dr. Mawad is a member of eight medical organizations, including the World Federation of Therapeutics & Interventional Neuroradiology, which he helped establish and ultimately led. He sits on the editorial boards of several prominent journals, including Interventional Neuroradiology, American Journal of Neuroradiology and Journal of Neurovascular Disease.
Soon after graduating with an M.D. from St. Joseph University, Lebanon in 1976, Dr. Mawad moved to New York City to complete an internship and a residency in diagnostic radiology. He then took up a fellowship in neuroradiology at the Columbia-Presbyterian Medical Center and went on to assume his first academic appointments at Columbia University College of Physicians and Surgeons, until 1984 when he moved to Houston.