Assessment of Competency and Kills in Training 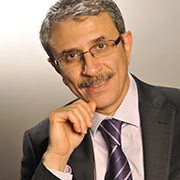 Mohamad Hamady graduated from medical school in 1989. Following 3 years of surgical training, he joined clinical and interventional radiology training at the American University of Beirut. He completed interventional radiology training at the King’s College, London in 2001 and he did 2 years of clinical research in IR at the Guys and St. Thomas’ Hospital, London.

Dr. Hamady joined Imperial College, London in 2003 as Consultant and Senior Lecturer in Vascular Interventional Radiology. He also works as an advisor to the National Institute for Clinical Excellence (NICE) on new interventional procedures. He is currently the vice chair of the Scientific Committee of the British Society of Interventional Radiology. Dr Hamady is the IR representative in the Clinical Innovation Team advising the clinical commissioning groups working for the National Health Service in England and Wales.

Dr. Hamady has over 125 papers in peer-review journals and 12 book chapters. He has given more than 65 talks and keynote lectures in national and international scientific meetings.

He is currently developing, in collaboration with industry, a new generation of fenestrated/branched stent graft for thoracic-abdominal aneurysms.