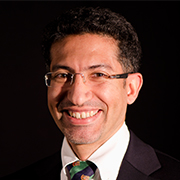 Head, Cardio-Thoracic and Vascular Unit of the Department of Radiology
University Hospital of Lausanne
Laussane, Switzerland

Salah D. Qanadli is a board certified radiologist in practice for over 20 years. He is a Professor of Radiology since 2001. He is currently the Head of the Cardio-Thoracic and Vascular Unit of the Department of Radiology at the University Hospital of Lausanne (CH). He is also a Honorary Professor at the University of Kingston London (UK) and a Director of the Quantitative Medical Imaging International Institute.

Prof. Qanadli is a Fellow of the Cardiovascular and Interventional Society of Europe and “Active Member” in more than 10 professional national and international societies including the Swiss Society of Radiology. He is the President of the Swiss Society of Vascular and Interventional Radiology (since 2013) and the past President of the Union of Swiss Societies of Vascular Medicine. He received several Awards and Distinctions and he is author of 3 patents and more than 180 peer review scientific publications. Through his leadership, he gave more than 250 invited lectures. He acts as an expert reviewer for more than 20 prestigious journals. His publications have been cited more than 3590 times in Google Scholar. Hirsch Index: 32, i10 Index: 62, RG: 41, RG Reach: 9961.