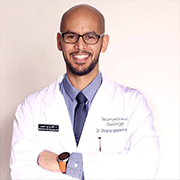 Shagran Binkhamis is an Assistant professor at King Saud University in Riyadh.

He obtained his Medical Degree from King Saud University in 2003 followed by Residency in Diagnostic Radiology at McGill University in Montreal, Canada (2005-2010) and Fellowship training in Musculoskeletal, Adult and Pediatric Vascular & Interventional Radiology at the Universities of Ottawa and Toronto, Canada (2010-2012). He has been a Consultant Radiologist since 2012. Since his return in late 2012, he was appointed as the Diagnostic Radiology Residency Program Director at King Saud University Medical City in Riyadh as well as the division head of Vascular and Interventional Radiology. He is also an affiliate Consultant as well as the fellowship director at King Faisal Specialist Hospital and Research Center in Riyadh.

Dr. Binkhamis is proactive in several research projects mainly related to Hepatocellular Carcinoma in Saudi Arabia and has several peer-reviewed publications as well as regional and international presentations related to Musculoskeletal and Interventional Radiology. His main academic interests are Interventional Oncolgy, Womens Health and innovative techniques such as Transradial and Robotic Interventions.