Cryo Ablation for Renal Cell Carcinoma: How I do it 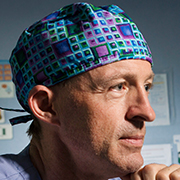 Thierry Jacques de BAERE is Head of Department of Intreventional Radiology at the Gustave Roussy, Cancer Center, Villejuif, France. He is Full time dedicated to interventional oncology since 1991.

His clinical work dedicated to minimal invasive therapy for treatment of liver, lung and kidney tumors. He has been working over 15 years in the field of percutaneous ablation of liver tumors either by direct injection, or more recently thermal destruction. He pionnierde portal vein embolization and lung radiofrequency abalation.