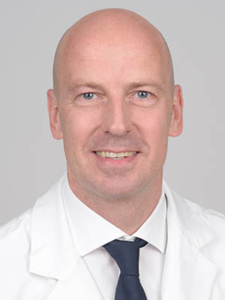 Dr. Tobias Jakobs, Associate Professor of Radiology, studied medicine at the Georg-August-University of Goettingen with elective periods at the University of Vienna as well as at the University of California San Francisco before he graduated in 2001 at the Ludwig-Maxilmilians-University of Munich. From 2001 until 2008 he was trained in the Department of Clinical Radiology at the University Hospital Munich – Campus Grosshadern with a special focus on minimal-invasive cancer treatment. From 2008 through 2010 PD Dr. Tobias Jakobs was leading the section of angiography and interventional radiology before he was offered the position of being the head of the Clinic of Diagnostic and Interventional Radiology at the hospital Barmherzige Brueder Munich in 2011.

Beside working as a physician PD Dr. Tobias Jakobs has authored more than 100 scientific papers and book chapters published in well-respected journals in his field. He is a committed member of various national and international societies like the German Roentgen Society (DRG), the Radiological Society of North Amercia (RSNA) and the Cardiovascular and Interventional Radiological Society of Europe (CIRSE).